The International Agency for Research on Cancer (IARC) is the outcome of an initiative by a group of leading French public figures, who succeeded in persuading President de Gaulle to adopt a project to lighten humanity’s ever-growing burden of cancer. The project rapidly gained momentum, and IARC was created on 20 May 1965, by a resolution of the World Health Assembly, as the specialized cancer agency of the World Health Organization. The Agency’s headquarters building was provided by its host in Lyon, France.

IARC has its own Governing Council, and in 1965 the first members were the Federal Republic of Germany, France, Italy, the United Kingdom, and the United States of America. Today, IARC’s membership has grown to 26 countries.

Over the past five decades, IARC has conducted research worldwide and helped thousands of cancer researchers from developing countries hone their skills through fellowships, courses, and collaborative projects. 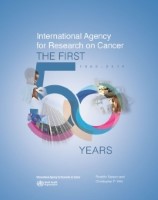 This book charts the birth of IARC during the 1960s – a period of great optimism for international cooperation and medical science. It goes on to describe the Agency’s major achievements over the past five decades in terms of the development of tools for conducting cancer research, the identification of risk factors, and the evaluation of preventive interventions.

See “International Agency for Research on Cancer: The first 50 years, 1965–2015. The History of IARC” at the IARC Publications website.

Videos recorded during the celebrations of the 50th anniversary of the establishment of IARC, held at the Hôtel de Ville de Lyon on 15 May 2015.

The Origin of the International Agency for Research on Cancer

This report is an account of the process by which IARC came into being, based on official documents, working papers, and correspondence. It describes the conception, the foundation, and the launch of IARC, including its initial phases of operation, and covers the period from 1963 until 1972.

This article by Walter Davis appeared in the March 1986 issue of World Health.
Close Reading Mode
UP