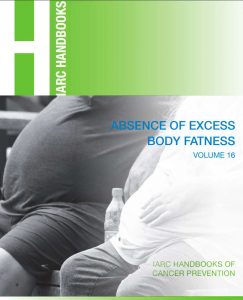 A Working Group of 21 independent international experts met at the International Agency for Research on Cancer (IARC) on 5–12 April 2016 to assess the cancer-preventive effects of the absence of excess body fatness. A summary of the evaluations has now been published in The New England Journal of Medicine. The detailed assessments will be published as Volume 16 of the IARC Handbooks of Cancer Prevention.

What is the aim of the IARC Handbooks of Cancer Prevention?

What is new in this evaluation compared with the 2002 evaluation?

Since 2002, a large number of new scientific studies on the effects of weight or weight change on cancer risk have been published.

More than 1000 studies were assessed by the IARC Handbooks Volume 16 Working Group.

There is a growing body of evidence that shows that obesity is a risk factor for several cancers in addition to those identified in the previous Handbook (Volume 6). The Working Group reviewed data for more than 20 cancer sites or types.

What types of studies were evaluated?

All pertinent available studies were evaluated, including intervention trials, cohort and case–control studies, studies in experimental animals, and in vitro studies on the mechanisms linking excess body fatness and cancer.

What were the results of the evaluation?

The Working Group concluded that there is sufficient evidence in humans for the cancer-preventive effect of the absence of excess body fatness. The absence of excess body fatness reduces the risk of cancers of the colon and rectum, pancreas, gallbladder, oesophagus (adenocarcinoma), gastric cardia, liver (hepatocellular carcinoma), kidney (renal cell carcinoma), ovary, endometrium of the uterus, breast in postmenopausal women, and thyroid, and meningioma and multiple myeloma.

In addition, the absence of excess body fatness may reduce the risk of fatal cancer of the prostate, diffuse large B-cell lymphoma, and cancer of the breast in men.

Results of studies of cancer prevention in experimental animals concur with those in humans. There is sufficient evidence in experimental animals for a cancer-preventive effect of limitation of body-weight gain by dietary restriction, for cancers of the mammary gland, colon, liver, pancreas, skin, and pituitary gland. In addition, an association between limitation of body-weight gain by dietary restriction and reduced cancer occurrence was observed for cancer of the prostate and for lymphoma and leukaemia.

Several mechanisms linking excess body fatness with carcinogenesis were identified, including chronic inflammation and dysregulation of the metabolism of sex hormones.

What do these results mean?

These results provide further scientific evidence that the absence of excess body fatness can reduce the risk of many cancers, and highlight eight additional cancer sites that have now also been linked with overweight and obesity.

How are overweight and obesity defined?

Overweight and obesity are defined as abnormal or excessive fat accumulation that may impair health.

Body mass index (BMI) is a simple index of weight-for-height that is commonly used to classify overweight and obesity in adults. It is defined as a person’s weight in kilograms divided by the square of their height in metres (kg/m2).

The World Health Organization (WHO) definition is:

BMI provides the most useful population-level measure of overweight and obesity as it can be used with the same cut-off points for adults of both sexes and all ages. However, it should be considered an approximate guide because it may not correspond to the same degree of fatness in different individuals.

What is the process behind the Handbooks evaluations?

What is expected from these results?

There is a worldwide epidemic of obesity, with up to 40% of the population being overweight or obese in some countries or regions. The topic of this Handbook was selected in relation to the United Nations/WHO Global Action Plan for the Prevention and Control of Noncommunicable Diseases to reduce obesity worldwide.

Does IARC make recommendations based on these results?

Similar to the Monographs, the Handbooks are an evaluation of the scientific evidence that an intervention may prevent cancer or reduce cancer risk, and the Handbooks do not make recommendations. The IARC Handbook evaluations may be taken up by government or national institutions to make recommendations and set public health policies, and by individuals who are concerned.

For further information, please visit the WHO media centre:
http://www.who.int/mediacentre/factsheets/fs311/en/

What are the WHO recommendations with regard to weight control?

Adopted by the World Health Assembly in 2004, the WHO Global Strategy on Diet, Physical Activity and Health describes the actions needed to support healthy diets and regular physical activity. The Strategy calls upon all stakeholders to take action at global, regional, and local levels to improve diets and physical activity patterns at the population level.

What causes overweight and obesity?

The fundamental cause of overweight and obesity is an energy imbalance between calories consumed and calories expended. Globally, there has been:

– an increase in intake of energy-dense foods that are high in fat and in sugar; and
– a decrease in physical activity, due to the increasingly sedentary nature of many forms of work, changing modes of transportation, and increasing urbanization.

Changes in dietary and physical activity patterns are often the result of environmental and societal changes associated with development and lack of supportive policies in sectors such as health, agriculture, transportation, urban planning, environment, food processing, distribution, marketing, and education.

How can the prevalence of overweight and obesity be reduced?

Overweight and obesity, as well as the related noncommunicable diseases, are largely preventable. Supportive environments and communities are fundamental in shaping people′s choices, making the healthier choice of foods and regular physical activity the easiest choice (accessible, available, and affordable), and therefore preventing obesity. WHO has issued recommendations on actions to take to avoid weight gain.

At the individual level, people can:
– limit energy intake from total fats and sugars;
– increase consumption of fruit and vegetables, as well as legumes, whole grains, and nuts; and
– engage in regular physical activity (60 minutes per day for children and 150 minutes per week for adults).

Individual actions can have their full effect only where people have access to a healthy lifestyle. Therefore, at the societal level it is important to:
– support individuals in following the recommendations above, through sustained political commitment and the collaboration of many public and private stakeholders; and
– make regular physical activity and healthier dietary choices available, affordable, and easily accessible to all.

The food industry can play a significant role in promoting healthy diets by:
– reducing the fat, sugar, and salt content of processed foods;
– ensuring that healthy and nutritious choices are available and affordable to all consumers;
– practising responsible marketing, especially that aimed at children and teenagers; and
– ensuring the availability of healthy food choices and supporting regular practice of physical activity in the workplace.