IARC Monographs evaluate the carcinogenicity of occupational exposure as a firefighter

The meeting for IARC Monographs Volume 132: Occupational Exposure as a Firefighter, convened by the International Agency for Research on Cancer (IARC) in Lyon, France, took place on 7–14 June 2022.

The Working Group of 25 international experts (including 3 Invited Specialists) from 8 countries evaluated the carcinogenicity of occupational exposure as a firefighter.

More information about the meeting is available on the IARC Monographs website: https://monographs.iarc.who.int/iarc-monographs-volume-132/.

The outcome of the assessment has been published in a summary article in The Lancet Oncology1 and will be described in detail in Volume 132 of the IARC Monographs, to be published in 2023.

1. What are the results of the evaluation?

Occupational exposure as a firefighter was classified as carcinogenic to humans (Group 1) on the basis of sufficient evidence for cancer in humans.

There was sufficient evidence for cancer in humans for the following cancer types: mesothelioma and bladder cancer.

There was limited evidence for cancer in humans for the following cancer types: colon cancer, prostate cancer, testicular cancer, melanoma of the skin, and non-Hodgkin lymphoma.

2 Evaluating carcinogen mechanisms is a challenging part of hazard identification, because the data on this topic are abundant and diverse. An evaluation approach based on 10 key characteristics of human carcinogens (doi: 10.1158/1055-9965.epi-19-1346) provides a holistic and unbiased way to tackle this challenge. The key characteristics of carcinogens were introduced to facilitate systematic consideration of mechanistic evidence in IARC Monographs evaluations.

2. Has this agent previously been evaluated by the IARC Monographs programme?

Occupational exposure as a firefighter was previously evaluated by the IARC Monographs programme in 20073 and at that time was classified as possibly carcinogenic to humans (Group 2B) on the basis of limited evidence for cancer in humans (specifically, for non-Hodgkin lymphoma, prostate cancer, and testicular cancer).

3. Why was occupational exposure as a firefighter re-evaluated?

The Advisory Group to Recommend Priorities for the IARC Monographs during 2020–20244 recommended that occupational exposure as a firefighter should be re-evaluated with high priority by the IARC Monographs programme. This recommendation was based on the publication of new large cohort studies in firefighters, with long-term follow-up for cancer incidence and/or mortality, and on the availability of new mechanistic evidence from epidemiological studies among firefighters.

4 IARC (2019). Report of the Advisory Group to Recommend Priorities for the IARC Monographs during 2020–2024. Lyon, France: International Agency for Research on Cancer. Available from:
https://monographs.iarc.who.int/wp-content/uploads/2019/10/IARCMonographs-AGReport-Priorities_2020-2024.pdf.

4. Was there a key new study or evidence that was used in the re-evaluation?

There was no single study that provided key evidence that was used to update the evaluation. Rather, there were more than 30 long-term studies of cancer among firefighters that provided new evidence to support the re-classification. The Working Group conducted a meta-analysis of all the evidence from the group of more than 20 non-overlapping cohort studies and found consistent evidence for an increased risk among firefighters for cancers at certain sites. Furthermore, the new mechanistic studies among firefighters found consistent and coherent evidence for five key characteristics of carcinogens, providing strong mechanistic support for the conclusions reached about elevations in cancer risk.

5. Who is exposed to this agent, and how?

There are more than 15 million firefighters worldwide. The term “firefighters” encompasses a heterogeneous group of paid and unpaid workers in industrial, municipal, and wildland settings, at the wildland–urban interface, and in other situations. In some settings, firefighting exposures have become more prevalent over time, because of the impacts of climate change.

Firefighters respond to various types of fire, such as structure, wildland, and vehicle fires, as well as other events (e.g. vehicle accidents and building collapses).

Firefighters are exposed to a complex mixture of combustion products from fires (e.g. polycyclic aromatic hydrocarbons, volatile organic compounds, metals, and particulates), diesel exhaust, building materials (e.g. asbestos), and other hazards (e.g. heat stress, shift work, and ultraviolet and other radiation). In addition, the use of flame retardants in textiles and of persistent organic pollutants (e.g. per- and polyfluorinated substances) in firefighting foams has increased over time.

6. What could be done to better protect firefighters?

As a research organization, IARC does not make recommendations about occupational health and safety. However, IARC encourages governments around the world, particularly in low- and middle-income countries, where use of effective personal protective equipment may be less common, to review the evaluation and to determine whether measures are needed to reduce carcinogenic exposures of firefighters in the workplace.

7. On the basis of this evaluation, what recommendations does IARC make?

IARC is a research organization that generates and evaluates evidence related to the causes of cancer but does not make health recommendations. However, the evaluations made by the IARC Monographs are often used as a basis for national and international policies, guidelines, and recommendations to minimize cancer risks.

You can find more information on the IARC Monographs evaluation process here:
https://monographs.iarc.who.int/wp-content/uploads/2018/07/QA_ENG.pdf.

8. What does the IARC Monographs classification mean in terms of risk?

The IARC Monographs classification indicates the strength of the evidence that a substance or agent can cause cancer. The IARC Monographs programme seeks to identify cancer hazards, meaning the potential for the exposure to cause cancer. However, the classification does not indicate the level of cancer risk associated with exposure at different levels or in different scenarios. The cancer risk associated with substances or agents that are assigned the same classification may be very different, depending on factors such as the type and extent of exposure and the size of the effect of the agent at a given exposure level.

9. What are the different strength-of-evidence evaluation groups used by the IARC Monographs?

The strength-of-evidence groups that contribute to each evaluation are summarized in the following table. 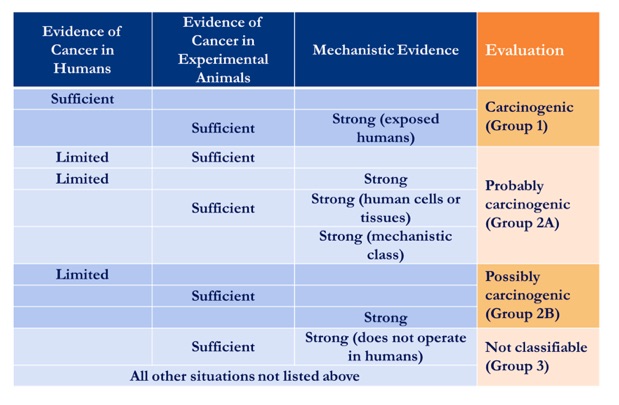 10. What are the four different categories into which agents are classified by the IARC Monographs?

Group 1: The agent is carcinogenic to humans.
This category is used when there is sufficient evidence for cancer in humans. In other words, there is convincing evidence that the agent causes cancer in humans. The evaluation is usually based on the results of epidemiological studies showing development of cancer in exposed humans. Agents can also be classified in Group 1 on the basis of sufficient evidence for cancer in experimental animals supported by strong evidence in exposed humans that the agent has mechanistic effects that are important for cancer development.

Group 2:
This category includes agents with a range of evidence regarding cancer in humans and in experimental animals. At one extreme of the range are agents with positive but not conclusive evidence regarding cancer in humans. At the other extreme are agents for which evidence in humans is not available but for which there is sufficient evidence for cancer in experimental animals. There are two subcategories, which indicate different levels of evidence.

Group 2A: The agent is probably carcinogenic to humans.
This category is used in three different scenarios:

These scenarios may also occur simultaneously within a Group 2A classification.

Group 3: The agent is not classifiable as to its carcinogenicity to humans.
This category is used most commonly when the evidence is inadequate regarding cancer in humans and inadequate or limited for cancer in experimental animals, and mechanistic evidence is less than strong. Limited evidence for cancer in experimental animals means that the available information suggests a carcinogenic effect but is not conclusive.

11. How was the evidence reviewed in the IARC Monographs evaluation?

During an IARC Monographs evaluation, experts critically review the scientific evidence according to strict criteria, which focus on determining the strength of the available evidence that the agent causes cancer. These criteria are described in the Preamble to the IARC Monographs, which is available on the IARC Monographs website: https://monographs.iarc.who.int/wp-content/uploads/2019/07/Preamble-2019.pdf.