Potential contributions to IARC are subject to our internal clearance and approval processes, including prior approval by the Governing Council for contributions with an annual budget of more than 0.5 million euros.

Due diligence and risk assessment are also carried out on potential contributions from non-state actors, i.e. nongovernmental organizations, private sector entities, philanthropic foundations, and academic institutions. IARC does not accept contributions from organizations or individuals that have links or associations of any kind with the tobacco or arms industries.

During the past three years, IARC has received increasing support from voluntary contributions, as shown in the figure below, which illustrates the new contracts signed in any one year. These contracts included several multi-year grants (3–5 years), where expenditure is spread over the duration of the award. 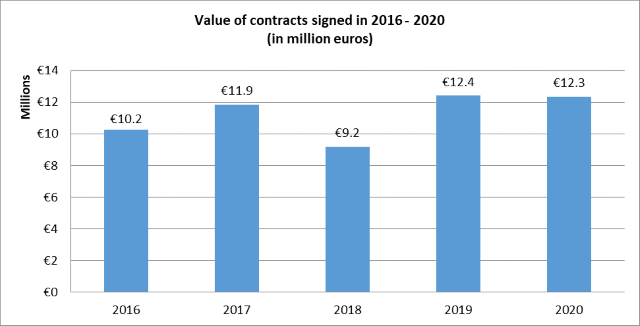 The annual revenue and expenditure from voluntary contributions during the past five years are shown in the figure below.