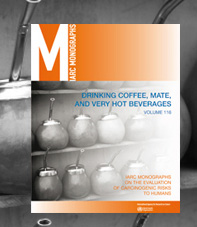 The International Agency for Research on Cancer (IARC), the cancer agency of the World Health Organization, has evaluated the carcinogenicity of drinking coffee, maté and very hot beverages. The detailed assessments will be published as Volume 116 of the IARC Monographs. A summary of the evaluations has now been published in The Lancet Oncology.

Debunking the myths of the Monographs: Six Common Misconceptions Dispelled.

Does the IARC classification mean that coffee is safe in terms of a potential link to cancer?

No. An evaluation of not classifiable as to its carcinogenicity to humans (Group 3) does not mean that a substance has been proven to be safe. It means that the existing scientific data do not enable a conclusion to be made about whether it causes cancer.
While this was the case for coffee overall, it was possible to conclude from the studies evaluated that coffee is unlikely to cause certain cancers, including cancers of the breast, prostate, and pancreas. Reduced risks were seen for cancers of the liver and uterine endometrium. For more than 20 other cancers, the evidence was inadequate to enable a conclusion to be made

Is drinking very hot beverages as dangerous as exposure to DDT? (They are both classified in Group 2A, probably carcinogenic to humans.)

No. Although drinking very hot beverages is classified in the same IARC category as DDT (IARC Group 2A, probably carcinogenic to humans), this does NOT mean that they are equally dangerous. The IARC classification indicates the strength of the scientific evidence for the carcinogenicity of a substance. It does not give any indication of the level of risk associated with exposure.
Therefore, since the two agents are classified in the same Group, this means that we can say with the same degree of certainty (or the same strength of the scientific evidence) that drinking very hot beverages and exposure to DDT can cause cancer, but we cannot say how dangerous each agent is or how much one would need to be exposed to it for it to cause cancer.

Drinking how many very hot beverages, and for how long, would trigger cancer?

How many oesophageal cancers are linked to drinking very hot beverages?

We don′t know how dangerous it is. The IARC evaluation tells us only that there is a probable link between drinking very hot beverages and oesophageal cancer. In most countries, coffee and tea are not drunk at such high temperatures, but in parts of Central Asia, South America, and East Africa, it is common for people to regularly drink beverages such as tea and maté at very high temperatures.

The classification of coffee has been “downgraded” since the previous evaluation. Does this mean that IARC got it wrong the first time?

No. Any scientific evaluation is necessarily based on the evidence available at the time it is done. However, scientific knowledge is always evolving, so Monographs evaluations can be updated when new data become available. The previous classification of coffee was a valid assessment of the data available in 1991. Since then, the evidence has strengthened, with more and better studies available on bladder cancer and more than 20 other kinds of cancer, and this has led to a new classification.
We now know more about coffee than we did before. With better studies available now than in 1991, the Working Group concluded that positive associations with bladder cancer that were seen in some early epidemiological studies may have been due to the influence of other important risk factors, such as tobacco smoking. In addition, the Working Group used the new evidence to identify five types of cancer that are probably not caused by coffee drinking. 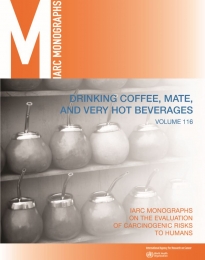